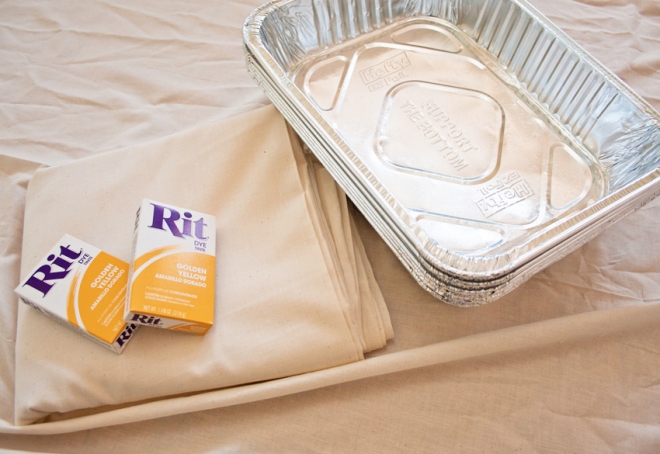 Since we’re planning a backyard wedding, we have been trying to come up with thrifty ways to dress up the dogwood tree we’ll be getting hitched under. I really wanted to take strips of fabric, cut them at different lengths, and dye them, ombre-style (Pete: “What’s an ombre?”). Our colors are technically yellow and grey, so I decided to go with golden yellow RIT dye. I loosely followed the tutorial by Green Wedding Shoes on how to make an ombre fabric backdrop. 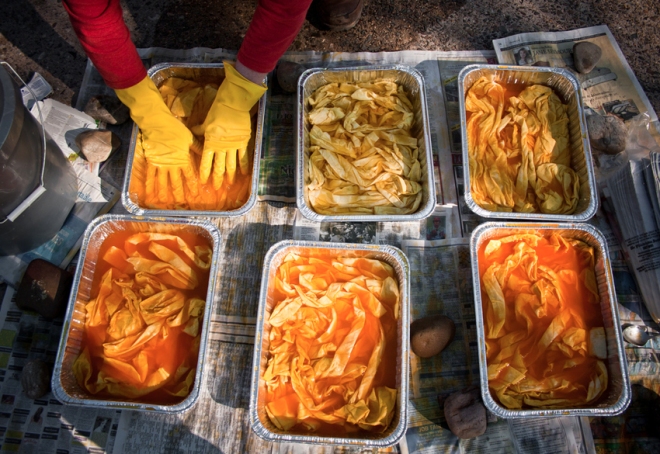 I need to stop pretending like DIY projects will go as smoothly as they look on wedding blogs. I have discovered that I am not especially crafty. I might be able to take lovely photos and draw illustrations, but when it comes to cutting fabric or handling a hot glue gun, I. Am. A. Mess. For this project, I measured out the different amounts of fabric dye in the pans, with the hope that the strips of fabric would have different monochromatic tones. Unfortunately, when I went to get the pot of boiling water from the kitchen, a gust of wind swept the pans upside down, sending the dye all over the place. Sigh. Pete came to the rescue and salvaged the dye while putting rocks into the pans to weigh them down, but we had trouble getting the dye to stick to the muslin fabric since it was often folded over and not fully dyeing. 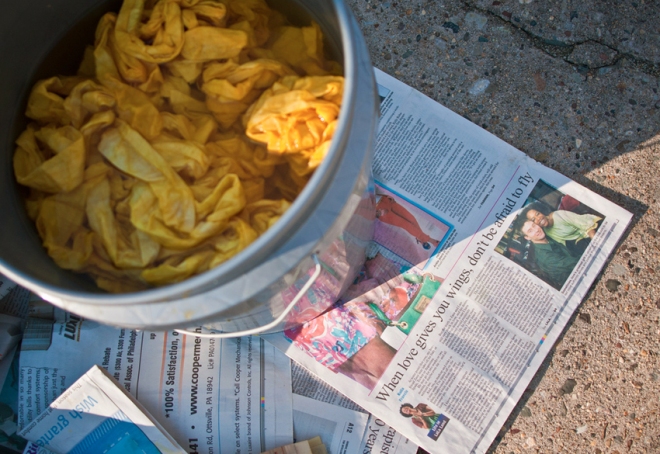 When I was cleaning up and feeling fairly defeated, I glanced down at the newspaper our bucket was sitting on and saw an entire front page written by our officiant, Naila, complete with photos of her and her boyfriend. It was just what I needed to remind myself that all of these DIY projects might not go perfectly, but at the end of the day, Naila will marrying Pete and I, which is kind of the best thing ever as far as I’m concerned (although Turkey Hill’s Choco Mint Chip is a fierce competitor for runner-up).

The fabric might all be the same color, but I still think it will look pretty (when it’s less wrinkly and thread-filled). Here’s an idea of the look we were going for (below), with pieces hanging at different lengths above us during the ceremony.

In other wedding news, Pete and I got our wedding bands at Halloween in Philly. I went with a delicate, art deco/victorian ring to match the 1915-1920s era engagement ring. 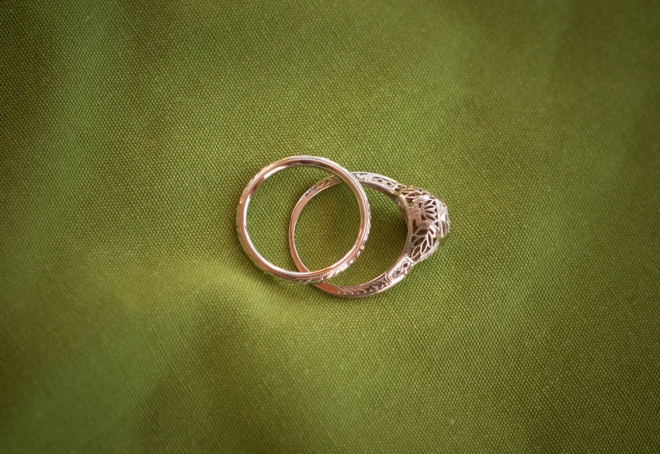 Pete went with a really simple, thin gold band that looks a bit like his father’s, which I think is nice. He has never worn jewelry before, so he just wanted to go with something as comfortable as possible.

Our wedding is five and a half months away, so we still have some time to play around with more projects. We’ve mostly been focusing our attention on fixing up the yard…I’ll be sure to share more about that soon!